Not much is different with me and my feathers. I am still selling on Etsy and I hope to do more craft shows in the new year. I would like to start updating this blog again as I have neglected it for over a year... time flies! I have tons of craft projects and parties, and of course new items to share that I will get up over the next few weeks. Stay tuned!
Posted by Jackie at 12:06 PM 0 comments
Email ThisBlogThis!Share to TwitterShare to FacebookShare to Pinterest

On April 1st myself and a couple friends of mine participated in the first friday craft fair in our city. It was my first time doing a craft show ever and overall I had a lovely time despite the strong wind. It was exciting to get a live reaction to my pieces and recieve feedback face to face.
I also debut my new earrings. I am hoping to put them on my Etsy sometime this week and see how they sell :) Take a look at the photos below for a sneak peak! 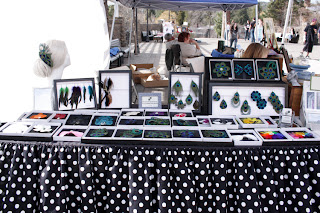 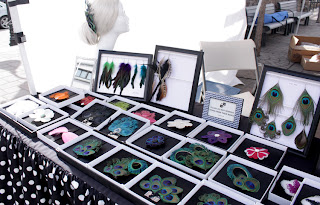 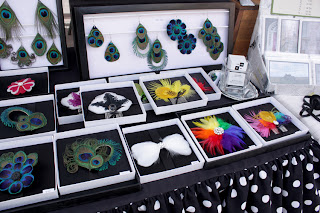 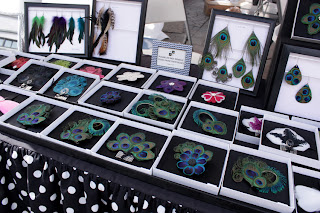 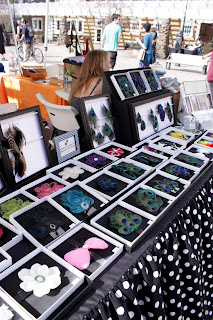 *Please note the GORGEOUS tablecloth my mother made for me. I wanted polka dots and couldn't find anything suitable so she offered to sew it for me. It was perfect!*
Posted by Jackie at 4:02 PM 1 comments
Email ThisBlogThis!Share to TwitterShare to FacebookShare to Pinterest
Labels: craft show, feather earrings

TIPTOE THROUGH THE TULIPS

My newest treasury is inspired by Tiny Tim's "Tiptoe Through the Tulips". There was so many lovely tulip items to choose from! Click here to see all of these amazing sellers! 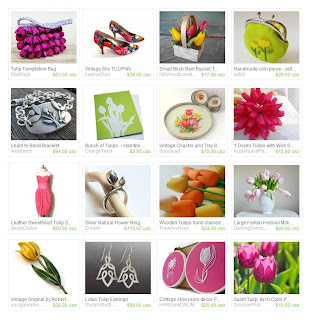 
Oh, tiptoe from the garden
By the garden of the willow tree
And tiptoe through the tulips with me


Knee deep in flowers we'll stray
We'll keep the showers away
And if I kiss you in the garden, in the moonlight
Will you pardon me?
And tiptoe through the tulips with me
Posted by Jackie at 9:32 PM 0 comments
Email ThisBlogThis!Share to TwitterShare to FacebookShare to Pinterest
Labels: etsy, lyrics, spring, tiny tim, tiptoe through the tulips, treasury

FREE HAIR CLIP WITH PURCHASE OF TWO OR MORE ITEMS

I am currently running a promotion in my Etsy shop http://www.foryoubyme.net/ . When you purchase 2 or more items you will receive a FREE Bernadine hair clip (pictured below). The Bernadine is one of my most popular items and has an $18 value! The gorgeous metallic blues of the natural peacock eyes are mesmerizing and would make a lovely accent to any ensemble. This offer is only available for a short time so act quickly! 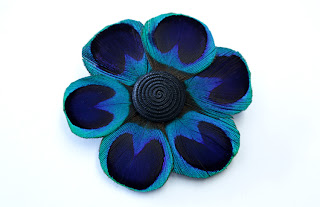 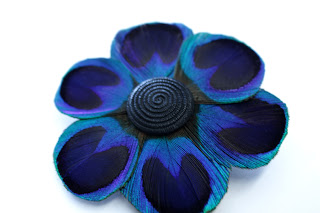 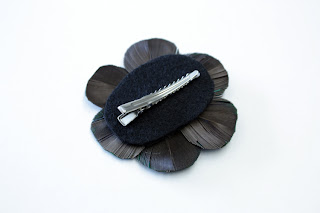 Check out some of the recycled, upcycled and reused items from my new treasury! So many talented people featured here :) Included are a bracelet made out of a tape measure, candle holders made from wine bottles, upclycled painted bird figurines and cufflinks made from vintage typewriter keys. 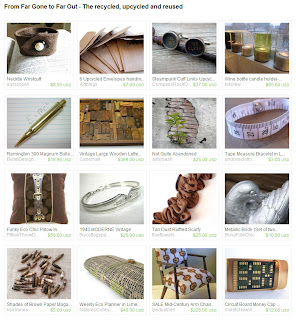 Posted by Jackie at 5:36 PM 1 comments
Email ThisBlogThis!Share to TwitterShare to FacebookShare to Pinterest
Labels: etsy, for him, handmade, recycled, treasury, upcycled

I have been extremely busy for the past couple weeks planning a fabulous baby shower for my sister. She is due in about a month and I am very excited for my little nephew to arrive!

The shower was yesterday and it went great! I made a cute (and tasty) cake that was inspired by the decor she picked for the nursery. 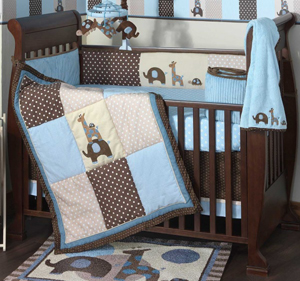 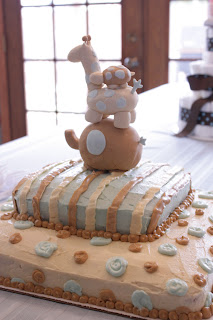 My cake - White cake with raspberry filling and not too sweet frosting and gumpaste animals on top
In addition to the actual cake I also made a diaper cake. That was quite a chore! I had never attempted such a thing before but I was happy with the result :) 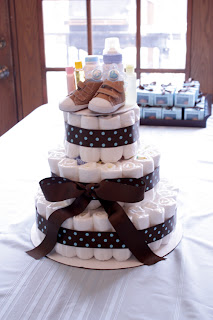 My true love affair of this event were the favors <3 I saw something similar online and decided to make them myself! In Photoshop I designed the box and then printed them out on light blue card stock. I then folded them up, glued them, added the oven door (which are made of plastic sheet protectors cut up), placed a little cinnamon bun soap care of SunBasilGarden on Etsy inside each one, and finished them off with a chocolate brown satin ribbon. This took hours to do but everyone loved them and they were adorable! 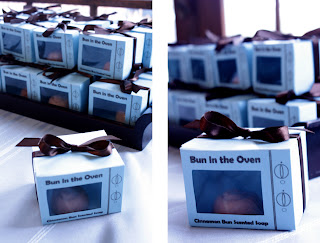 The games at this shower were also very special to me! We played Baby Animal Bingo that I made cards for. I called of the name of an animal's baby, i.e. cygnet, and they marked of the picture of the adult animal on their card which for cygnet would have been the picture of a swan :) It took some time to make the 30+ cards (since I had to rearrange the images on each one) but it was fun and a little harder than playing traditional bingo. If you want to try this game at your shower let me know as I have lots of cards made and I can send you the jpgs to print :) 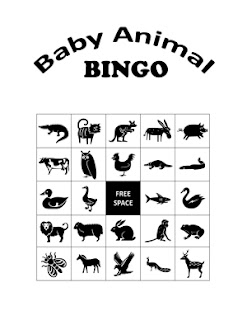 My favorite game was Who's Your Daddy?! I photoshopped images of babies to include a feature from my sister Jessica and 2 facial features from a famous actor. The guests then had to identify who was the celebrity father of each baby. I put all the images on an SD card and showed them to the guests on the TV via the Wii. It worked flawlessly and provided a lot of laughter and fun as some of those babies were very silly looking! Haha This game was definitely the highlight of the party! 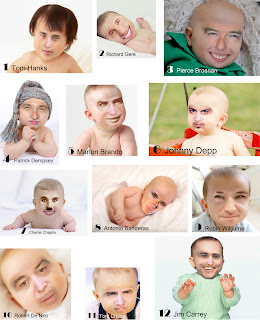 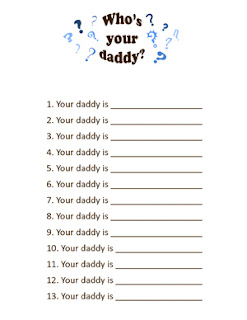 The sheets that guests filled in :)
All in all it was a great day and I am sure that everyone had a wonderful time! Next time you plan a baby shower try out one or two of these ideas :)
Posted by Jackie at 2:43 PM 6 comments
Email ThisBlogThis!Share to TwitterShare to FacebookShare to Pinterest
Labels: baby shower, crafting, fun, games, homemade, ideas, unique

Many new items at http://foryoubyme.net/ ! Go check it out :D 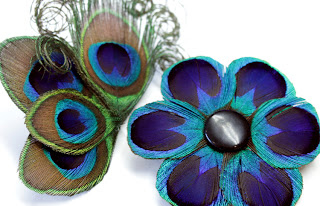 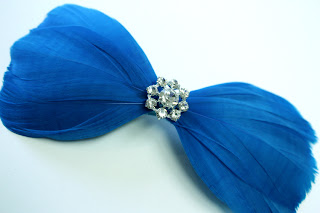 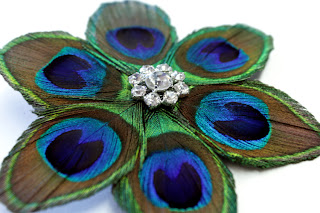 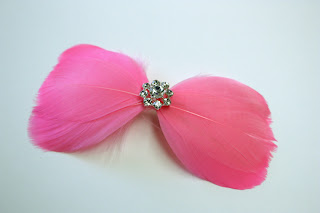 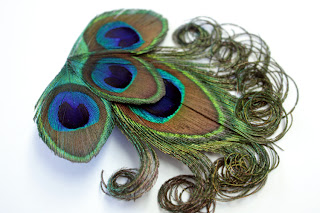 Posted by Jackie at 2:51 PM 3 comments
Email ThisBlogThis!Share to TwitterShare to FacebookShare to Pinterest
Labels: etsy

Yesterday was a just a blur of hot glue, hand stitching, glitter and feathers. Shortly after I woke up I received an email requesting 10 of one of the fascinators in my shop to be used for bridal party headpieces. Luckily I had the supplies on hand to make 10 of them) I don’t usually have that many of one thing since I am a new shop and since a lot of my jewelry pieces are vintage. I spent all day making them and got them boxed up and shipped them out this morning. It was my first big order so it was exciting but very stressful :)
After that whole thing, I started thinking about getting more supplies on hand incase this becomes a regular thing… making multiples of an item for bridal parties or what have you I mean. So, I just placed a big order of metal hair combs and pins and some feathers. I was a girl scout growing up so I decided to “Be Prepared”!
Posted by Jackie at 9:01 PM 0 comments
Email ThisBlogThis!Share to TwitterShare to FacebookShare to Pinterest

Last night I had a dream… a dream that I was decoupaging the entire exterior of my home with tabloids. The bad tabloids, you know… “Bigfoot Kept Lumberjack as Love Slave” or “Abraham Lincoln Really a Woman”. It was AMAZING! Someday maybe I will do it for real :)
I will decoupage anything with anything. My family and friends would attest to it! I have countless decoupage suitcases, boxes, frames, etc. around my home. I remember in high school I convinced a couple of my closest friends that it was a really good idea to decoupage shoes. They looked awesome but it turned out to be less than practical. HaHa I am completely against ever getting a tattoo simply because I don’t like anything enough to put it on my body permanently but I must say that Mod Podge is pretty darn close to being tattooed across my forehead!
Posted by Jackie at 9:00 PM 1 comments
Email ThisBlogThis!Share to TwitterShare to FacebookShare to Pinterest
Older Posts Home
Subscribe to: Posts (Atom)

Jackie
I enjoy turning the far gone into the far out and also making items from scratch. Glue, glitter, feathers, rhinestones… I love them all! Sharing my projects, art and tips and tricks I learn along the way is one of my favorite parts about creating.